It is since Warhammer siege come out in '98 that I decided to add a unit equipped with halberd.
But several other project come before.
Now I went back to my bits box (especially the one with the tag "forgotten stuff" ) and I found a lot of men at arms I collected during the years for this old project of mine.
I found my self with a full unit of men a arms with halberds.
There are models form Foundry, Citadel, Harlequins, Grenadier, plus other unknown manufacturers.
I (Marquess Etien De Rochefort) am a trusted servant of the Duke of Quenelles and often the commander in chief of his army.
Therefore I wanted to stress this alliance by using the Duke's colours (blue with a minor use of white) on this unit.
I keep following the old custom that no blazon can be used on commoners, nor on their dirty banners (there are no symbols on them, just plain colors).
So, to make clear those men at arms are under the Duke's command, I added the Duke's heraldry (a white Unicorn) on the standard pole.

I like the way the leather 'blend' softly with the metal parts and the contrast with the deep blue of the Quenelles heraldry.
I have also introduced to my Bretonnian models the "mud&dirty" weathering I got used to add to my 40K Imperial Guard.

I am very satisfied with the result.

I added a foot knight as unit champion. It is a very slim model, so I suppose this knight is a noble woman hiding her face with the great helm.
The truth is that she is one of the bastard daughter of the Duke Tancred.

I tried to represent a banner that does not give victory points to the opponent but still be very visible on the battlefield.

Maybe I will be soon using this unit during a siege scenario. 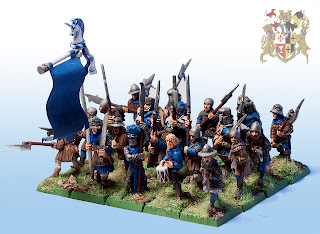 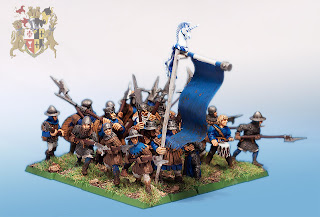