I finished a unit I've been working on since many years.

I 've always loved the idea of a unit of lowly villains, covered in mud, fighting with forks and clubs.

I started collecting models since I discovered that such a unit was already present in the original Bretonnia 3rd edition army.
In that time the militiamen were called Rascals and it depicted a cheap, low Ld, low WS troop.
I like the size of unit as well, from 20 to 60 models!
They are the human goblins indeed. Interesting to notice that a Bretonnian army had to include at least a unit of them. 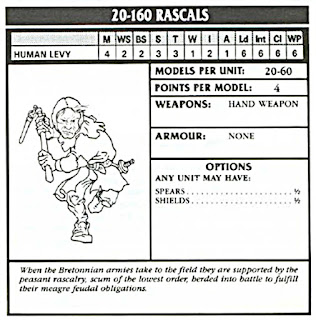 The unit was updated years later on White Dwarf 137, when it became a more general Feudal Levy. The unit size was "reduced" to maximum 40 models and got access to some weaponry. 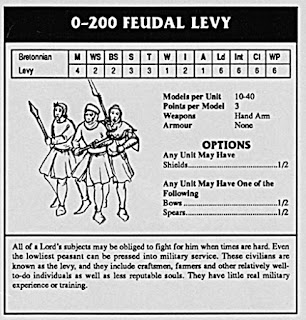 I collected many different models in order to form this unit. There are few old Citadel miniatures, but the majority comes from Wargames Foundry Armed Peasants.
With its Questing Knight relic shield as banner (topped by a wooden doll of the Lady) and its smith champion, the unit is now ready to fight (or at least die trying to) in my army alongside more regular infantrymen.
I use them in Kings of War as Militia Mob in the Kingdoms of Men army list or as Villein Plowshares in the Brotherhood list. 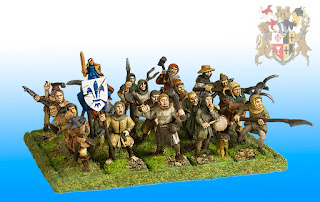 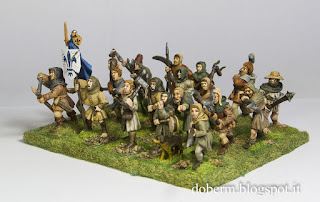