I completed an old project of mine: introducing field artillery to my armies.
I know, it is not very Bretonnian and it is against the rules of chivalry.
But you can be sure that these catapults will be used only against other warmachines, shooting units and lowborn massed infantry formations. All the enemy heroes, cavalrt and monsters will be faced ony by my Knights

I converted two Mantic Undead catapults to use them in my Bret army. They have been "restored" and the screaming skulls removed, as well as several spikes.
I've chosen catapults instead of trebuchets, as the latter are fixed siege artillery and do not fit IMO in a field battle.

Each catapuly, by tradition, belongs to one of the twin fortress of the De Rochefort's main keep: Domanne and Berme. The heraldry of the two castles are depicted on the shields hung on them.
Nowadays both catapults are manned by Berme's crew, only an old and experienced yeoman craftman from Domanne has the honour to oversee the operations, even though his sight is not good anymore as it was in the past.

The dog companion from the Bretonnian plastic sprue has been painted as a fox terrier. I love it. 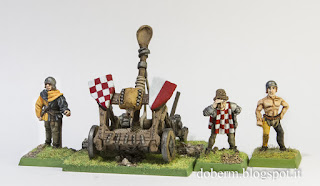