My Imperial Guard army focuses on CityFight veteran from the forge world of Vanheim.
Three regiments compose the 1st City Fight Veterans Brigade:
After decades of war on different planets, the numbers of the three regiments are very reduced. Therefore they received replacements and equipment from the Planetary Defense Force or other disbanded regiments during the campaign they fought in the cities and hives.

Especially the 81st Venheim Siege Regiment made large use of local militia, recruiting from volunteers, penal legion, or common citizens. The attrition tactics employed by the regiment's officers require a large number of men to be used as cannon fodder.

I had already several models used as Militia or White Shield. They are mostly Catachan models converted to look as brute penal legion or factory workers conscripts. 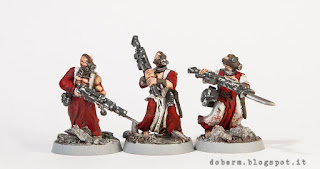 Now I want to add a second unit of Militiamen. They will be recruited from the local pious citizens, summoned by Adeptus Ministrorum preaches. The most zealots will answer the call to fight the enemy of the Imperium.
The Imperial Cult and the Cult of Redemption will bring enough men to my army to form a Mob to be thrown at the enemy. Their life will allow the rest of the army to survive long enough to annihilate the enemy with artillery and heavy weapons. 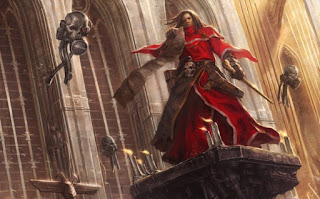