Finally the Imperial Guard mortar has the role it deserves!
Its incredible low point const makes it a perfect support choice for the Imperial Guard.
I had some very ugly mortars painted more than 12 years ago. It was the occasion to replace them.

I converted and painted a team on a 40mm base. I wanted the crew to interact with the heavy weapon as a single entity, something I feel I could not obtain on a larger base. 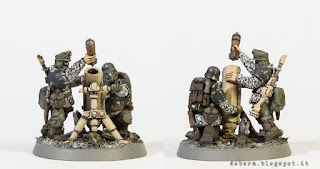 I also painted two extra mortars, mounted them on separated baes, and gave them to my heavy artillery crew. 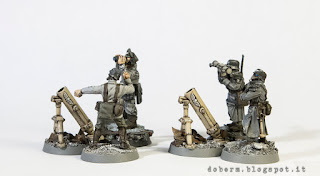 The latter was a time saving painting strategy, but I plan to assemble other teams on the 40mm bases in order to deploy at least two units of them.
Etichette: Imperial Guard WH40K