I finished the first tank for my Italians in Russia.

The Semovente L6 could seem a weird choice in the game of Bolt Action. Indeed it is a strange tank, a small copy of the German StuG, with it light anti tank gun and super thin armour.

Evereything started as I read the list for Italians at the "Ostfront" in the book "Italy and the Axis". There it is listed that an extra Semovente L6 can be included. Then I ordered a Blitzkrieg Miniatures resin model, I added Perry's metal crew and (after a couple of years) I finally added it to my army.

I must say, it is a challenge to play with such a weak tank. But I got used to it and the L6 can be a great torn for the enemy. With its 100 points, it brings a mobile anti tank that already killed on its second game a T-34 hitting it on the flank. The pintle-mounted MG is a good "fortified" shooting points against enemy infantry and I do not have to worry to use it, as the tank is anyway open topped.

The (very) low profile makes it very easy to get hard cover from any rock or wall on the battlefield , while as the tracked vehicle the L6 can go over every kind of terrain.

I still have to prove it, but I am sure that also as command vehicle (with the AT gun being only a tube to disguised a second MG) with its points reduction and its +1 to order tests, the L6 would be a great anti-infantry vehicle. 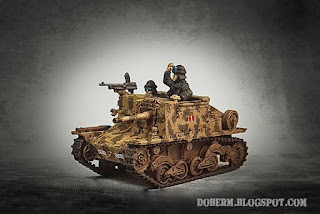 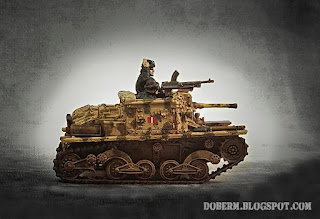